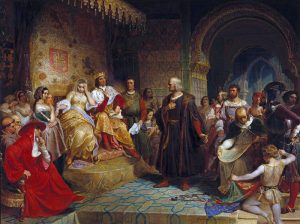 A scene from the book, Columbus petitioning Queen Isabel, while she looks bored.